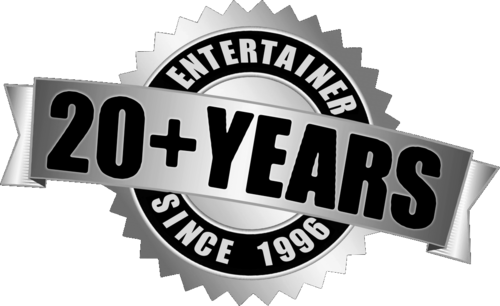 Yes, Nathan Tricky Allen is a magician, but don’t be fooled – you will see NO tuxedo and NO sparkly boxes in this show.  Instead, Nathan combines sleight-of-hand magic, stand-up comedy, dangerous tricks, stupid stunts, immature pranks, and hilarious (and unpredictable) audience interaction into one of the very few magic shows on the face of the planet that is both geared for adults AND funny.

The best trick up Nathan’s sleeve is his ability to connect with a crowd, and it’s a trick he can pull off whether he is at a comedy club, a biker bar, or a Fortune 500 corporate event.

Keep Reading ▼
The International Brotherhood of Magicians presented Nathan with the Justo Hijo Magic Award, based on skill, originality, and entertainment value. He is the only magician ever featured in “The Grassroots Comedy Tour” and “The Dirty Jokes & Magic Tricks Show”. He has performed at private events for heads of state, has appeared on international television on TV3, broadcast from the United Kingdom, and has been seen here in the USA on NBC, ABC, The CW, and PBS television news programs.

More than just something out of thin air, Nathan’s slow-but-steady rise in the entertainment industry is the result of a 20+ year, love-hate obsession with his work. He started learning magic when he was only 8 years old and did his first paid performance when he was just 12.

Now, at the age of 36, Nathan has a long list of performances under his belt, for companies including 3M, Alliant Energy, Ford, Charter Communications, Honda, Chevrolet, RadioShack, Swiss Valley Farms, Wal-Mart, and Facebook, to name just a few.

He loves coffee, hates snow, and enjoys arguing with the television… when it’s turned off. ■