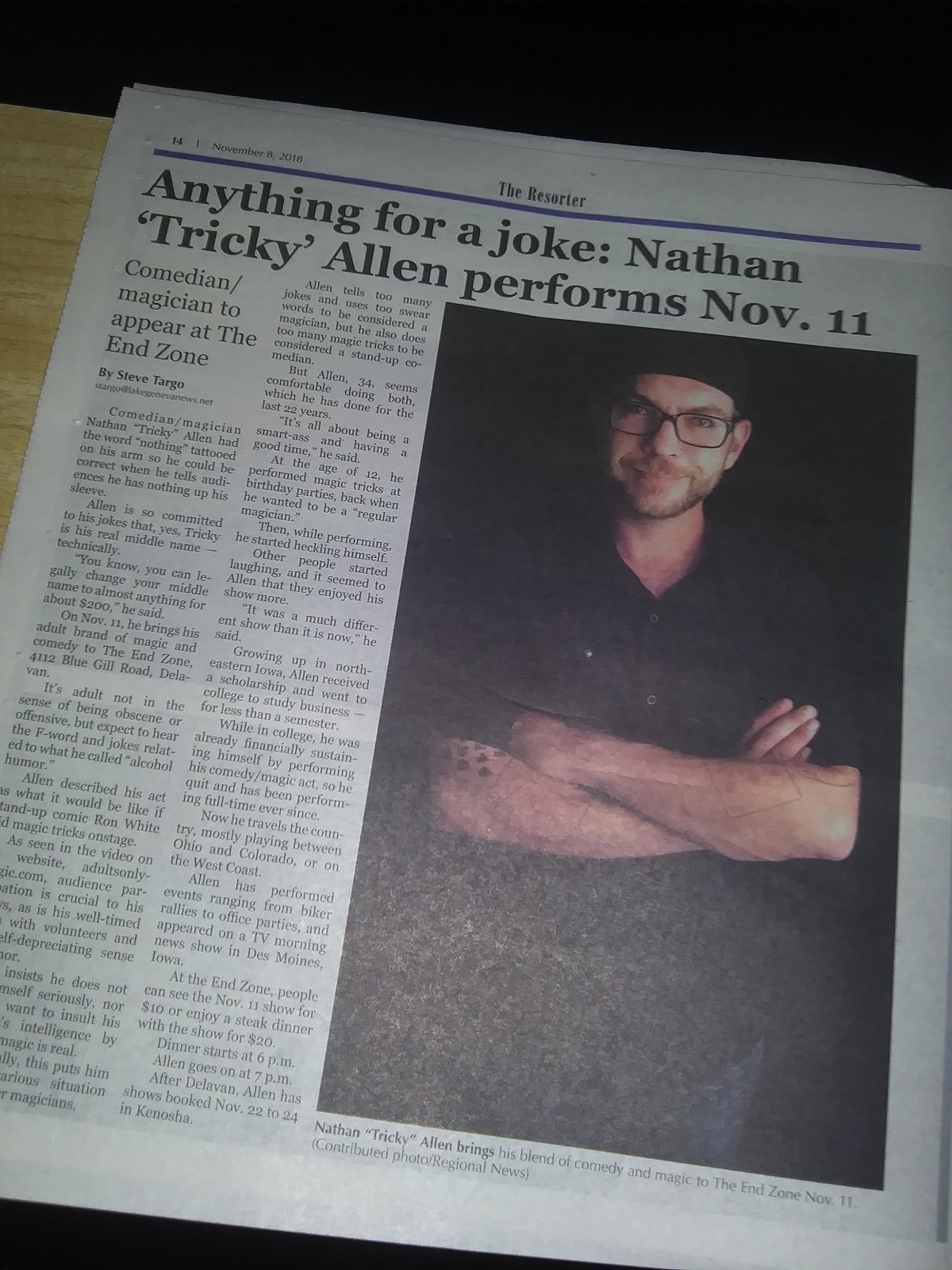 Anything for a joke: Nathan ‘Tricky’ Allen performs Nov. 11

Comedian/magician Nathan “Tricky” Allen had the word “nothing” tattooed on his arm so he could be correct when he tells audiences he has nothing up his sleeve.

Allen is so committed to his jokes that, yes, Tricky is his real middle name — technically.

“You know, you can legally change your middle name to almost anything for about $200,” he said.

On Nov. 11, he brings his adult brand of magic and comedy to The End Zone, 4112 Blue Gill Road, Delavan.

It’s adult not in the sense of being obscene or offensive, but expect to hear the F-word and jokes related to what he called “alcohol humor.”

Allen described his act as what it would be like if stand-up comic Ron White did magic tricks onstage.

As seen in the video on his website, adultsonlymagic.com, audience participation is crucial to his shows, as is his well-timed quips with volunteers and his self-depreciating sense of humor.

He insists he does not take himself seriously, nor does he want to insult his audience’s intelligence by insisting magic is real.

Naturally, this puts him in a precarious situation among other magicians.

But Allen, 34, seems comfortable doing both, which he has done for the last 22 years.

“It’s all about being a smart-ass and having a good time,” he said.

At the age of 12, he performed magic tricks at birthday parties, back when he wanted to be a “regular magician.”

Then, while performing, he started heckling himself.

Other people started laughing, and it seemed to Allen that they enjoyed his show more.

“It was a much different show than it is now,” he said.

Growing up in northeastern Iowa, Allen received a scholarship and went to college to study business — for less than a semester.

While in college, he was already financially sustaining himself by performing his comedy/magic act, so he quit and has been performing full-time ever since.

Now he travels the country, mostly playing between Ohio and Colorado, or on the West Coast.

Allen has performed events ranging from biker rallies to office parties, and appeared on a TV morning news show in Des Moines, Iowa.

After Delavan, Allen has shows booked Nov. 22 to 24 in Kenosha.

Pretty sure my exact words were “card tricks and dick jokes” – not “alcohol humor.”

I… I don’t even know what “alcohol humor” means, really.

Oh, also, I didn’t actually compare myself to Ron White like that… I have a bit of an ego, but I’m nowhere NEAR even playing the same GAME as him, and trying to compare the two of us would take some serious nerve. I’m not quite THAT pompous.

…I said it’s like what would happen if Ron White’s “don’t give a shit” ATTITUDE tried to do a magic show.

It’s a subtle distinction, but an important one; I don’t want you showing up to my show and expecting to see me with a cigar, a Texan accent, and millions of dollars, lol.

Anyway, below are the details of the show.  Hope to see you there! 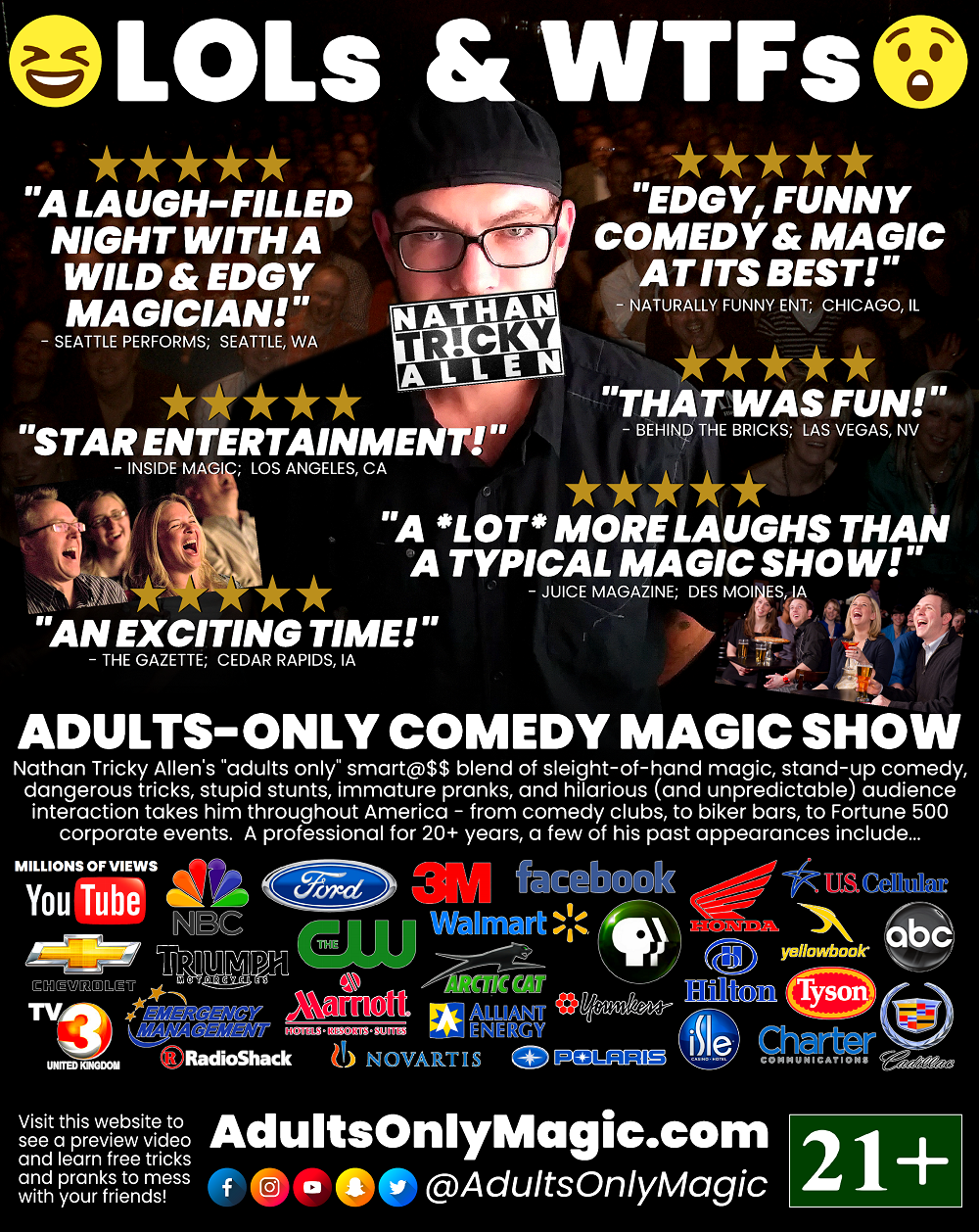