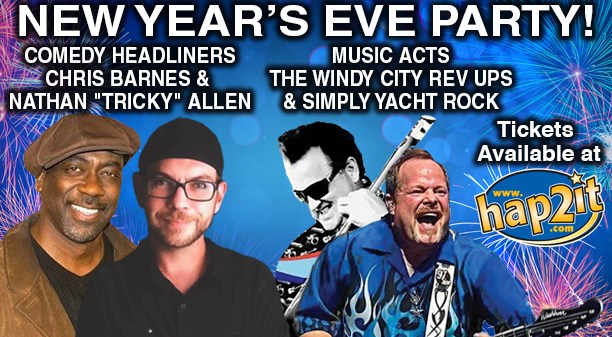 Ring in 2022 with your sides SPLIT🤣 from hilarious comedy, your jaw DROPPED😮 from amazing magic, your feet moving uncontrollably from the incredible music🎸, and your face SORE from smiling so much!😊

Comedy shows in the Kenosha Comedy Club room are at 8:00pm or 10:00pm (each show includes BOTH headliner comedians AND all-access to the music all night) – so choose whichever comedy show-time works best for you.

Yes, Nathan Tricky Allen is a magician, but don’t be fooled – you will see NO tuxedo and NO sparkly boxes in THIS show. Instead, Nathan combines sleight-of-hand magic, stand-up comedy, dangerous tricks, stupid stunts, immature pranks, and hilarious (and unpredictable) audience interaction into one of the very few magic shows in all of America that is both geared for adults AND funny.

Part magician, part comedian, and totally dysfunctional, the best trick up Nathan’s sleeve is his ability to connect with a crowd… and it’s a trick he can pull off whether he is at a comedy club, a biker bar, or a Fortune 500 corporate event.

The International Brotherhood of Magicians presented Nathan with the Justo Hijo Magic Award, based on skill, originality, and entertainment value. He has performed at private events for heads of state, has appeared on international television on the UK’s TV3, has been seen here in the USA on NBC, ABC, The CW, and PBS television news programs, and has a long list of corporate performances under his belt, for companies including 3M, Alliant Energy, Ford, Charter Communications, Honda, Chevrolet, RadioShack, Swiss Valley Farms, Wal-Mart, and Facebook, to name just a few.

When he was six years old, Chris Barnes already knew he wanted to be a stand-up comedian. In 1980, he made his first appearance on stage at Sardinos, a local nite club in Milwaukee, Wisconsin. Ever since then, this native Milwaukeean has been making his mark on the comedy scene throughout the Midwest, the South, and the East Coast with his storming style of humor.

Barnes can be best described as a high-energy comic that will take an audience and keep them laughing as he interprets his experiences of life. Barnes is also the man of many faces; his personality and facial expressions will bring an audience to life.

Barnes has worked and laughed with such people as John Mendoza, JJ Jimmy Walker, Andrew Dice Clay, Sinbad, Bill Cosby, and many others.

Its no surprise Barnes has become a national headliner, working in such clubs as Dangerfields in New York City; Rascals in New Jersey; Zanies in Chicago; Chaplins in Detroit; Comedy Cafe in Milwaukee; and many others throughout the country.

Simply Yacht Rock is a solo performance of soft rock classics from the 70’s and 80’s from artists like Ambrosia, Little River Band, Seals and Crofts and many more!

His current set list includes songs you’ve grown up with; a virtual cornucopia of your favorite guilty pleasures from the 70’s and 80’s that induce an immediate sing-along vibe, and can take the listener back to a time where the music was filled with melody and stories. Mark will sing every song and play guitar along with professionally structured backing tracks. His witty banter and welcoming demeanor make him an easy fit for all ages.

Their stage shows are far beyond ordinary and well suited for music lovers of all generations. They perform popular music, anthem’s hits and originals that are guaranteed to get rock clubs rocking’, blues joints smoking’ and dance floors hopping’.

The band has been performing together for over 15 years. They have toured in the USA, Europe & Asia, released 10 CD’s, have listeners worldwide and they have won numerous music awards including Chicago’s “Best R&B Band”, “Best Blues Band” and “Best Local CD Release”.

Click the link, get your tickets, and I’ll see you on New Year’s Eve at the Wyndham!  Let’s ring in 2022 with big smiles on our faces! 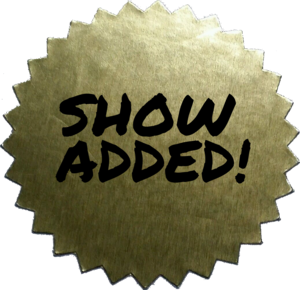 P.S. – I’ll be at the Kenosha Comedy Club on Saturday the 1st, too!

In addition to performing at this big New Year’s Eve party, I will be sticking around for an extra day to perform at the Kenosha Comedy Club (inside the Wyndham Garden hotel) on Saturday, January 1st. Click here for details so you can tell your friends who didn’t make it to the NYE party to come see me on Saturday the 1st!